On Thursday Boyfriend and I headed to the Samsung GALAXY S4 launch party with Yaw and Dan thanks to our friends at Samsung we got an early preview of the brand new S4 AND we were treated to a concert by Walk Off The Earth – do you know them? Ellen made them mega famous after YouTube made them super famous. They are several flavours of awesome!

While sipping on G & Ts, me, and cokes, Boyfriend, we checked out the all-new Samsung S4; which I’ve decided has to be my next phone because it’s so great I’m pretty sure that it’s made of unicorn blood. OK maybe not real-live unicorn blood it’s probably the synthetic kind. I love my Motorola, really I do, I’m an Android convert thanks to my Motorola but the S4 has so many features that I can’t see myself not shelling out pre-end-of-contract kind of monies to make it mine. 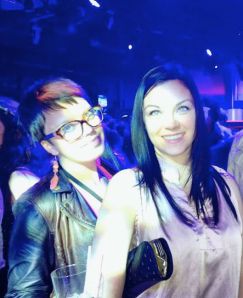 The S4 is designed with people like me, and probably you, in mind. The multitasking features allow you to split the screen so you can work on multiple things at once; no more flipping between apps to make sure you’re answering that email correctly just split your screen like a technology wizard. There are some incredible features for at-home use that make an impressive move towards eliminating the Apple stronghold on the mobile market. Want your phone to connect to everything in your life? The S4 can do that. But the Air View feature  that allows you to swipe over your phone to answer calls or scroll without ever touching your screen is probably what they used that synthetic unicorn blood for.  Magic.

The event itself was smart and well executed even if I wasn’t a huge fan of listening to a holographic Fiest the technology was impressive.  Although it does make me wonder if in the future concert tickets will carry an asterisk on them to denote whether this is a REAL-LIVE PERFORMANCE or a HOLOGRAPHIC PERFORMANCE; I imagine both will be communicated with equal levels of marketing enthusiasm and spin to make whichever appearance it is sound like you are being given exactly what you want.

Thanks to Samsung for making me desperately want a new S4 even though my phone is only 6 months old and for properly introducing me to a band that I am now listening to on repeat at work.