On Tuesday I headed to a special pre-screening of DIY Network’s new show, Vanilla Ice Goes Amish. Yep, that’s a for real show and that’s really the name. I went assuming that I would probably enjoy mocking Vanilla Ice being ridiculous and, hopefully, rapping about the difficulties of Amish life; I left with an appreciation for the Amish people and a new found respect for Mr. Ice and a new show to somewhat guiltily add to my PVR.

I arrived at the screening around 6PM and met up with my buddy Jeff who enjoys ridiculous things almost as much as I do, he was wearing an Oregon Trail t-shirt which felt somewhat planned and totally appropriate. We enjoyed some Trius wine and snacks before the show started, prior to seeing the actual show I kind of assumed that Vanilla Ice Goes Amish would be better with at least a minor buzz.

Right before the screening started Vanilla Ice himself showed up to introduce the show, and compliment Jeff on his t-shirt, before he sat down to watch it with us; he sat right in front of us and as we were watching the show he provided Jeff, Jesse and I with what was essentially a director’s commentary version of the show. Did you know that the Amish consider zippers a modern convenience? I didn’t; the history of the zipper goes back to 1913 which doesn’t exactly scream modern to me but they’re serious about it and all of their pants have a two flap button system which according to Vanilla Ice, you don’t ever get used to. 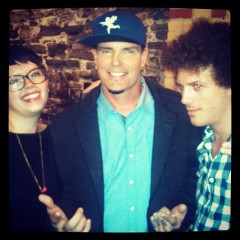 The show was funny, has a lot of a heart and is a really interesting peak into a society that most of us don’t know much about. Vanilla Ice Goes Amish premieres this Sunday at 10PM on DIY Network Canada, before you brush it off as a totally ridiculous show give it a shot, I wouldn’t be surprised if it becomes your new guilty pleasure.